Econosights - The wealth effect and the impact on consumer spending 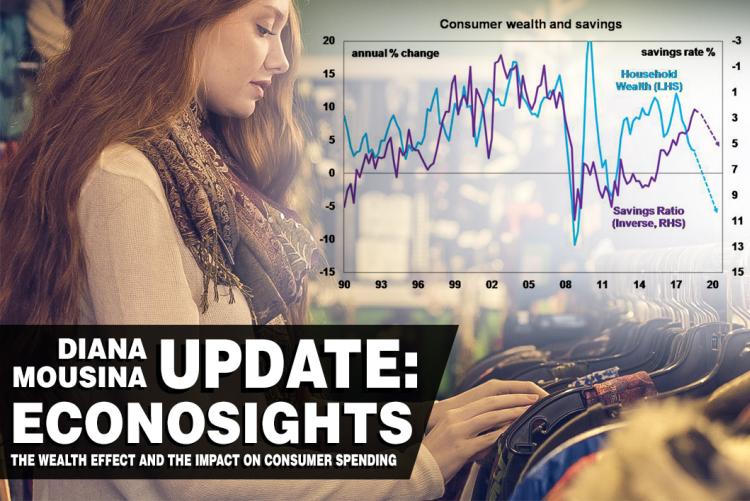 The “wealth effect” is an economic concept referring to a change in consumer spending patterns following an adjustment to wealth held by consumers. Household wealth (or net worth) is a measure of the value of physical assets owned like homes and business premises as well as financial assets like shares, less any debt held.


The Reserve Bank of Australia (RBA) has historically been sceptical about the evidence of a traditional wealth effect in practice (i.e. an increase in wealth lifting consumption and vice versa). But, in his most recent speech, RBA Governor Lowe indicated that the RBA now does see some examples of changes in housing wealth impacting vehicle sales and spending on home furnishings. The RBA estimates that a 10% change in net housing wealth affects consumption by 0.75% in the short-run and 1.5% in the long-run.


We think that the current housing downturn will have a larger negative wealth effect than the RBA is assuming. We anticipate further falls in home prices and a broader impact on consumer spending relative to the RBA’s projections.


We explore the issue of the wealth effect in this Econosights, particularly as it relates to housing assets and its impact on the Australian economy.

Housing as a source of wealth

Housing is both a source of wealth but also a form of consumption. Households can be a home owner while non-home owners “consume” housing through paying rent. As a result, changes in home prices do not have an equal impact across households, which can make measuring a direct wealth effect difficult. For example, higher home prices are positive for investors and home owners with no plans to upgrade but are negative for households looking to get into the market or upgrade. Renters may also be worse off as higher home prices could lead to higher rents. However, the composition of home ownership in Australia means that the majority of the population benefits from higher home prices, with 2/3 of households either owning a home outright or paying a mortgage.


As well, the tax environment in Australia arguably favours investment into housing because of negative gearing, capital gains tax concessions and favourable tax treatment of housing in self-managed superannuation funds. The recent home price boom encouraged more investors into the market with around 11% of the adult population now property owners, up from around 7% over the past 20 years.

The impact of home prices on household wealth

The Australian Bureau of Statistics (ABS) publishes estimates of the value of household assets, liabilities and wealth for an average household in Australia which we use as a measure of wealth. According to the ABS, housing accounts for the majority of household wealth (67%). As a result, changes in home prices have a significant impact on the total wealth held by households. The chart below shows the close relationship between home prices and wealth. As home prices surged over 2013-17, with growth averaging at around 9% per year, growth in household wealth was also strong and ran in line with home prices, also around 9% annually. Over the next year, we expect home prices to fall by another 5 10% nationally (they are currently down nearly 8%) with larger declines in Sydney and Melbourne (of another 15% or so). This would see a top-to-bottom price fall of around 15% nationally. Home prices are being hit by a number of negative factors including a huge run up in supply (particularly for apartments), an 80% or so collapse in foreign demand, concerns about potential changes to tax treatment of housing with a Labor government, a tightening in lending standards (which has more to go), the switch from interest only to principal and interest loans and falling prices feeding on themselves as consumers worry about falling prices.


Growth in household wealth over the past year has slowed, but is not as weak as suggested by declines in home prices (see chart above) which is partly because the data is so delayed (the latest available print is for September 2018). A deterioration in housing wealth is expected to become more apparent in the next readings of the data. We expect household wealth to fall by 10% from current levels over the next 1-2 years as home prices continue to fall.

Savings and its impact on spending


One argument some put to dismiss the wealth effect is that consumer spending growth over recent years has not been particularly strong despite the fall in the saving ratio. While it is true that consumer spending growth has been modest, spending growth may have been even lower without the fall in the saving ratio. Weak wages growth likely played a role in reigning in spending. We expect wages growth to remain at just over 2% for the next year as underemployment in the labour market is still high and unemployment is expected to rise. More evidence of the wealth effect

The wealth effect is also evident in collapsing motor vehicles sales which are down by 9% year on year to February. Vehicle sales and associated spending on cars accounts for around 7% of household spending.


Retail spending (around 30% of consumer spending) growth has also been disappointing over recent months with annual growth stuck at a low 2.7%. Weakness has been concentrated in household goods and department stores but is likely to spread to other areas of retail, particularly clothing and soft goods.

The impacts of the wealth effect and its drag on household consumption makes us cautious about the Australian economy over 2019-20. We see GDP growth disappointing the RBA’s expectations and inflation not picking up significantly from current levels. We think the RBA is underestimating further declines in home prices, the impacts of these falls on the consumer and the flow on effects to the rest of the economy. As a result, we see the RBA having to cut the cash rate twice this year with interest rates ending the year at 1.00%.


Rate cuts will provide some support to spending but this will come with a lag. Household tax cuts are also likely to be announced in the Federal Budget as the government revenue position is in better shape than expected. We estimate that these tax cuts are worth around 0.5% of GDP. This will provide some support for consumers, but not enough to offset the downsides from falling household wealth. A Labor party election victory would still see some household tax cuts, but it may be more skewed towards lower income households.


Expectations of rate cuts are supporting the Australian share market (up nearly 10% over the last three months). But, further falls in home prices and a weaker growth environment may mean corporate earnings miss expectations which will hit share prices, particularly for some consumer stocks.