Graeme Colley Updates on Self Managed Super Funds (SMSF): Changes to age limits on contributions and the work test 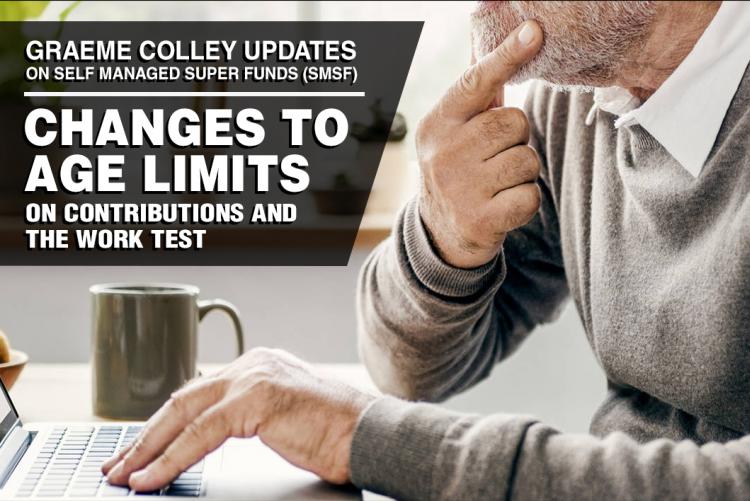 From 1 July 2020, the recent change in legislation has allowed making contributions to super easier for anyone aged 65 or 66 years of age as there now is no requirement to meet the work test. But once an individual reaches 67 years of age, the work test must be met prior to the contribution being made.

What is the work test and how does it work?

The work test requires a person to be gainfully employed for at least 40 hours in 30 consecutive days during the financial year before concessional or non-concessional contributions can be made after reaching the age of 67.

Being gainfully employed means that a person must be engaged in paid work in an occupation. This includes being employed or self-employed for gain or reward in any business, trade, profession, vocation, calling, occupation or employment. 'Gain' or 'reward' includes receiving wages, business income, bonuses and commissions or other income from the employment or self-employment.

It can be complicated to determine whether a person is engaged as an employee. Examples could include someone who is babysitting, cleaning, lawnmowing or gardening, mainly on a casual basis. However, to be considered an employee, the arrangement must be more than just a domestic or family arrangement.

For an individual to be in a genuine employment arrangement, the person’s employer would need to make payments which are taxable and tax is deducted from the payment, if required. Also, the employer may be required to meet their superannuation guarantee obligations, workplace health and safety requirements, arrange insurance and worker's compensation and ensure that all employee entitlements are provided. This needs to be backed up with relevant business records and that contracts and employment agreements in place.

A person who is 67 years of and under the age of 75 may wish to make deductible and non-deductible personal super contributions. However, they are required to meet the work test in most situations. If an individual intends to claim a tax deduction, they are required to complete a notice of intent which must be lodged with the super fund and acknowledged in writing by the fund’s trustee.

There are two exceptions that apply to personal super contributions where the work test is not required to be met. The first applies on a once only basis for the financial year after a person has ceased work and their total super balance for that year is less than $300,000. The second is for anyone who qualifies for the downsizer contribution as it can be made at any time after they have reached the age of 65.

A proposed change to the legislation that we have been waiting for is the extension of the bring forward rule for non-concessional contributions from age 65 to age 67. This amendment is currently before parliament.

The amendments to the bring forward rule were intended to commence from 1 July 2020. However, the legislation has been delayed as parliament has not been able to sit on a regular basis for most of this year due to the COVID-19 pandemic. The good news is that these amendments which were introduced into the parliament in May this year were debated in the House of Representatives on 25 August.

The debate seems to have bipartisan support among the major parties which is a positive sign and will be voted on by the House of Representatives before it progresses to the Senate for debate. The hope is for the amendment to receive a clear passage through both houses and not be referred to the committee stage prior to being considered by the Senate.

The only issues arising from the potential passing of the legislation is the date of effect and whether transitional arrangements will be put in place for those who may not have been able to access the bring forward rule. This would apply to anyone who was not able to make non-concessional contributions greater than the standard amount prior to reaching the age of 67 and will not meet the work test in this financial year.

The extension of the work test exemptions to 67 years of age for personal superannuation contributions has been a bonus in these difficult times. However, we wait in anticipation to see whether the extension of the bring forward rule to the age of 67 will become law in the foreseeable future.