There has been much debate about the short-term economic and investment impact of coronavirus – on economic activity, unemployment, interest rates, house prices, shares, etc. However, the magnitude of the shock means it will have medium to longer-term implications as well. Of course, there is a danger in placing too much weight on current circumstances in assessing the future. Given this, we need to be a bit cautious, but here are 10 medium to longer-term impacts.

#1 Lower interest rates for even longer

The hit to economic activity has been huge, resulting in a lot of spare capacity that will take years to be used up. We don’t see global and Australian economic activity getting back to pre-coronavirus levels until late next year or 2022. 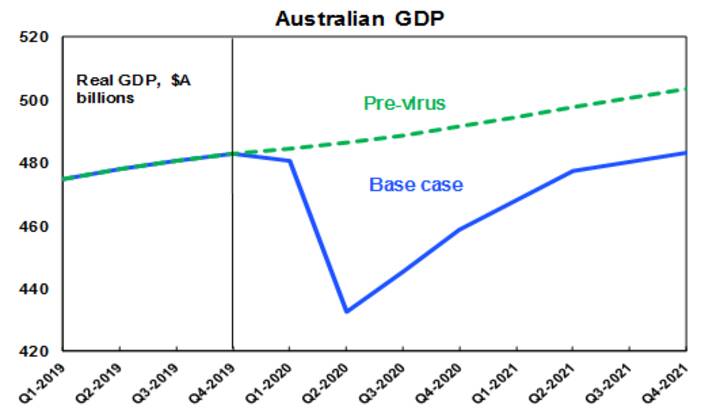 Unemployment will take even longer to fall – it tends to go up via the lifts and down via the stairs. This will mean low inflation or deflationary pressure for the next three years at least. Which will mean central banks will be biased towards low interest rates for several years which will keep bond yields ultra-low.

Another way of looking at this is that given the hit to economic activity, interest rates would normally fall a lot further. In the GFC the Australian cash rate was cut by 4.25%. But because rates are already at or near zero, they can’t – so monetary easing is being achieved by quantitative easing. But an unconstrained cash rate for Australia would see it fall to around -3% not getting back to 0.25% until 2023 at the earliest. In the meantime, it means several years of very low rates. It’s little wonder the RBA is targeting a 3-year bond yield of 0.25% and its low-cost funding rate for banks is also 0.25% for three years.

Implications - Low rates mean very low returns from bank deposits and ultimately bonds but they make higher yielding shares and assets like property and infrastructure relatively attractive to investors once the hit to earnings and rents passes.

#2 A further blow to globalisation

Recent years have seen a backlash against globalisation evident in the rise of Trump, Brexit and a backlash in some countries against immigration. The coronavirus disruption has added to this. Worries about the supply of medical items have led to pressure for their domestic supply. This could move on to food security and looks to be morphing into a push to bring supply chains “back home”. Borders have been closed for health reasons and it is unclear when they will all reopen.

Implications - While the outcome may simply be a diversification in reliance away from China to other emerging countries, the risk is that this all leads to reduced growth potential for the emerging world generally. Longer term it could reduce productivity if supply chains are managed on other than economic grounds and could remove a key source of disinflationary pressure from the global economy.

#3 Another leg up in the US/China “cold war”

The trade war of 2018 and 2019 turned into a truce with the mini Phase One deal signed in January. However, with the coronavirus-driven shutdown, China is behind in its agreed purchases of US goods. What’s more, President Trump now faces a difficult task in winning the November presidential election - US presidents have not been re-elected when there is a recession and rising unemployment. This has been made worse by Trump’s inept handling of the crisis. This has left Trump keen to shift the blame over the virus and China is an easy target. He has already made some threats on this front and imposed some minor sanctions on China. At present Trump’s approval rating is around where it’s always been and is not weak enough for him to conclude that he has nothing to lose by taking big risks on this front (such as tearing up the trade deal and imposing more tariffs). But if his prospects start deteriorating dramatically, he may conclude that he has nothing to lose, particularly with 66% of Americans now having a negative view of China, up from 48% in 2018. The latter also suggests a Democrat president may also take a tough stance with China – although likely with more of a diplomatic focus. The point is that the US/China trade war risks ramping up.

Implications – this could act as a negative for growth, work against multinationals and become a rising negative for shares. It also poses a threat to Australia but if Australia remains broadly neutral it may be minor (despite recent tensions around barley and beef) given that most Australian exports to China are for domestic use, not for reexport to the US.

The GFC brought an end to economic rationalism and support for smaller government and was associated with a leg up in public debt levels. Fading memories of the problems of too much government intervention added to this. The coronavirus crisis has likely added to support for bigger government intervention in economies and the tolerance of higher levels of public debt. Particularly given that it may have enhanced perceptions of inequality with well-paid white-collar workers being able to isolate and work at home whereas lower paid workers have been stood down or have to continue working in less safe conditions. Safety regulations to ensure distancing will also add to business costs, although hopefully this will just be for the short term if a medical solution to coronavirus is found.

Implications – bigger government and aggressive measures to address inequality could reduce productivity growth and hence economic growth. Although it’s worth noting that if the Australia adopts a productivity enhancing agenda it may buck this trend.

While it’s hard to see inflation becoming an issue in the next three years, the combination of rising public debt, money printing and more protectionism risks a longer term pick-up in inflation to say above 4%, particularly if central banks don’t reverse easy money quickly once spare capacity is used up.

Implications – a resurgence in inflation to high levels would be bad for productivity and negative for assets that benefitted from the “search for yield”. But it’s a much longer-term issue.

The GFC led to a wariness and a degree of investor caution on the part of households. This has been evident in around 50% of Australians nominating bank deposits and paying down debt as the “wisest place” for their savings compared to around 30% before the GFC, and scepticism of shares. The coronavirus pandemic and its hit to incomes and job security has likely reinforced this. Some even argue that the period of self-isolation will drive a rethink in terms of what’s important in life resulting in more mindful consumers focused on “do I really need it?” I am not so sure about the latter beyond the short term as people have short memories, but it is likely that household caution will remain, resulting in higher precautionary saving and more conservative investment strategies. 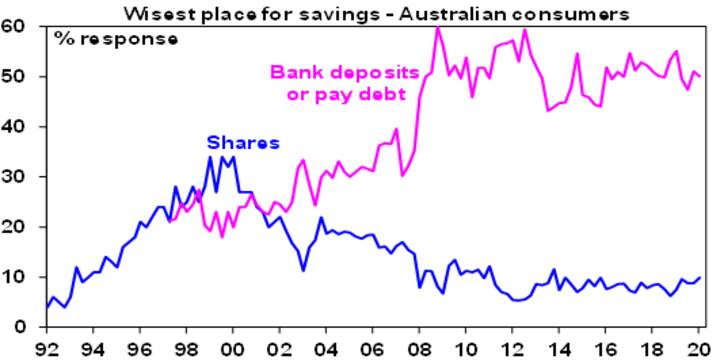 Implications - this will weigh on discretionary retailers, banks and wealth managers.

Which brings us to airlines. Less business demand for travel points to lasting damage. Some say the same may apply to tourists – but if a medical solution is found or the virus just dies out I suspect tourism will bounce back but based on the experience after 9/11 it may take a decade to fully recover.

Implications – airlines have already taken a big hit, but they are likely to be the slowest industry to recover.

#9 Another test for the Eurozone?

Slow progress towards providing support for Italy has led to renewed concerns that the Euro area may break up. Populist anti Euro leaders may get a boost from the crisis, particularly if there is a new wave of migrants from Libya. However, Europe seems to be doing what it always does – gradually heading towards a solution with Germany agreeing with France for the common issuance of bonds and shifting in favour of fiscal stimulus. The pressures to keep the Eurozone together (safety in numbers, a high degree of identification as Europeans, solid public support for the Euro, Germany benefitting from the EU and Germany’s huge exposure to Italian bonds via the ECB) remain far stronger than the forces pulling it apart.

Implications – I wouldn’t bet on the Euro breaking apart.

This is already a reality in Australia with travel bans and since immigration normally accounts for around 1 percentage point of population growth in Australia its absence knocks up to 1% off economic growth. The issue is how long immigration remains low. Australia would likely be a popular destination for migrants and students given its success in limiting coronavirus. And a rigorous testing/quarantine regime could allow both back sooner rather than later. That said I suspect while students will return faster, political pressures associated with higher unemployment will allow only a gradual recovery in immigration.

Implications – this is bad for home building & home prices as the hit to immigration has cut underlying dwelling demand by 80,000pa. But I suspect it creeps back over the next five years.

Several of these longer-term implications will constrain economic growth and hence potential investor returns – notably the reversal of globalisation, bigger government, consumer caution & lower immigration. The faster embrace of technology will work in the other direction though to boost productivity and lower for longer interest rates are positive for growth assets.

Finally, a word of caution - anyone who got too negative for the long term in the last really major pandemic of 1918-19 might have missed out entirely on the “Roaring Twenties!” It’s much easier to think up negative things.