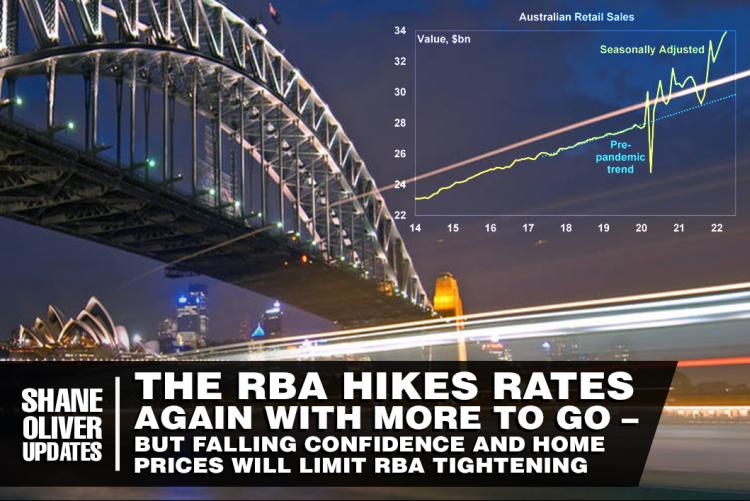 The RBA has increased its official cash rate by another 0.5% taking it to 0.85% for the second rate hike in this cycle. This was above market expectations. Our expectation was for a 0.4% hike with the risk that it would be 0.5%.

In justifying the move the RBA noted that: the economy is resilient; the labour market is strong with the unemployment rate falling to just 3.9%; the Bank’s business liaison continues to point to higher wages growth; and inflation is expected to increase even more than it expected a month ago with notably higher prices for electricity, gas and petrol. The RBA’s move is consistent with the stepped up pace of tightening from central banks in New Zealand and Canada and likely soon in the US as they all try to get ahead of the surge in inflation and to contain inflation expectations. This and the low starting point explains why the 0.5% rate hike is the biggest in 22 years.

The RBA’s commentary remained hawkish reiterating that it will “do what is necessary” to return inflation to target and that this will likely require “further steps in the process of normalising monetary conditions” which in short means that more interest rate hikes are likely on the way. 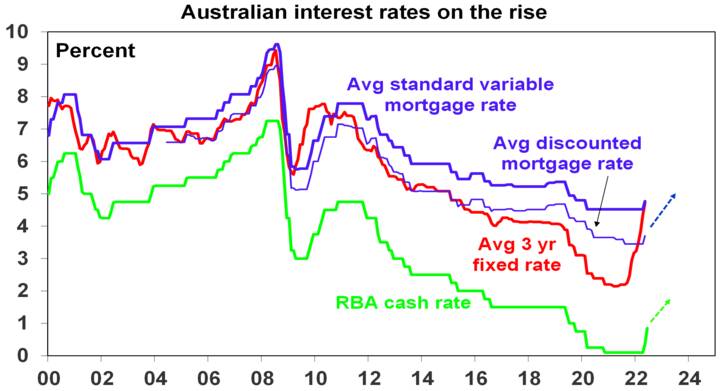 Banks are likely to pass the RBA’s rate hike on in full to their variable rate customers and deposit rates will rise further. Fixed mortgage rates have already moved up in line with rising bond yields in anticipation of higher cash rates – more than doubling from record lows around 2% early last year.

Supply constraints – reflecting the impact of the pandemic, the war in Ukraine and the floods – are the main factor behind the rise in inflation and RBA rate hikes won’t boost supply. But the RBA has little choice but to continue the process of tightening monetary policy. 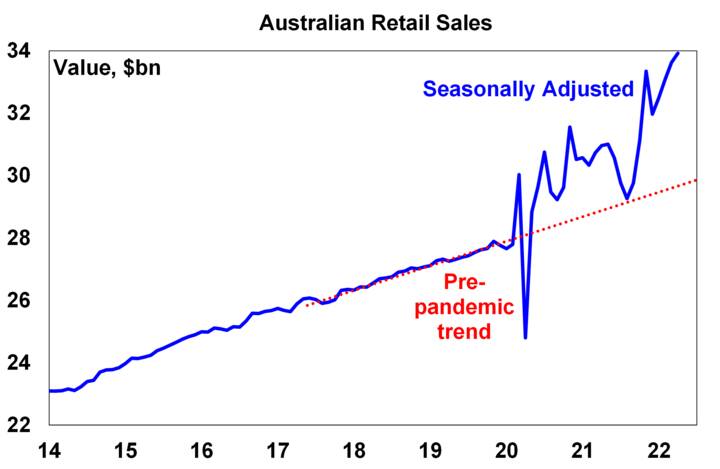 All of the above considerations point to more rate hikes ahead. But trying to get a handle on where they peak is always a bit of a guessing game. A build up in excess household saving of around $250bn through the pandemic – which is evident in a 25% rise in bank deposits since late 2019 and many households being well ahead on their mortgage payments – imparts a degree of resilience for households which some have argued means that the RBA may have to be a lot more aggressive taking the cash rate to 3.5% or more. This along with the hawkish nature of the RBA’s post meeting statement this month appears to underpin futures market expectations for the cash rate to rise above 3% by year end and then 4.5% by mid next year and to then stay above 4% for the subsequent two years.

However, its likely that the cash rate won’t have to go that high before the RBA achieves its aim of cooling demand enough to take pressure off inflation and keep inflation expectations down. 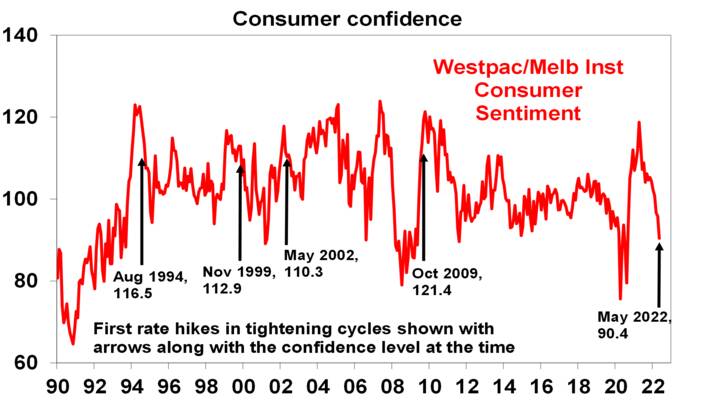 National average home prices have already started to fall, whereas at the start of previous RBA rate hiking cycles they were rising solidly and did not start falling until sometime after the start of rate hikes. See the next chart. 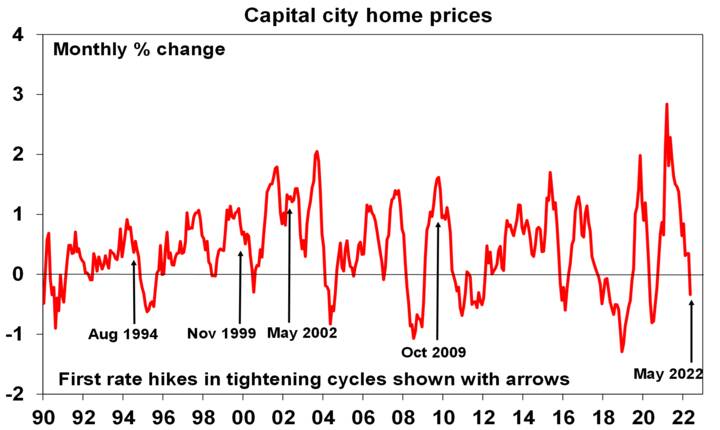 The earlier than normal hit to confidence and home prices likely reflects a combination of things: a greater sensitivity to interest rate movements now reflecting higher levels of household debt (and high levels of debt required to get into the property market for new borrowers); the fact that the tightening cycle started before the rise in the cash rate this time around with the removal of the 0.1% bond yield target last year which helped drive a sharp rise in fixed mortgage rates and pulled the rug out from under the housing boom before the RBA started to move the cash rate; and cost of living pressures that have seen an unprecedented plunge in real wages and hence spending power in the context of the last 20 years. 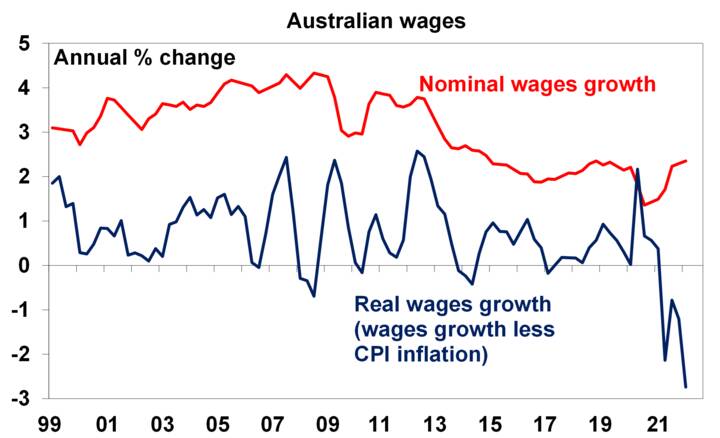 But regardless of the precise drivers, the bottom line is that RBA monetary tightening appears to be getting traction earlier than would normally occur in an interest rate tightening cycle. While the RBA does not target house prices, falling home prices (where we expect a 10 to 15% top to bottom fall) will weigh on consumer spending (via negative wealth effects as we saw in 2017-18). All of which will start to take pressure off inflation and limit the amount by which the RBA ultimately will need to raise the cash rate by. So we expect that while the RBA will raise the cash rate to 1.5% to 2% by year end, the peak in the cash rate will come at around 2% to 2.5% by mid next year. This is well below money market expectations for a rise above 4%.

Given that the latest RBA hike was roughly in line with our expectations we have made no changes to our cash rate forecasts. We continue to see average home prices falling 10-15% over the next 18 months but this may now occur earlier and faster than previously expected. 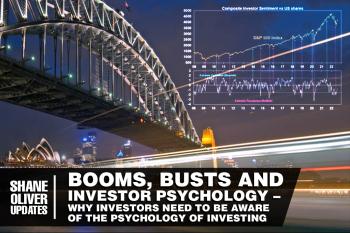 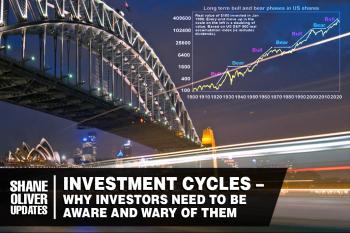 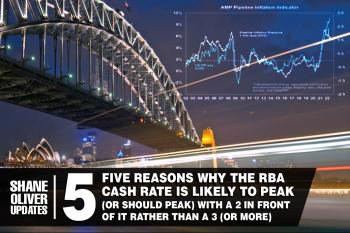