The trade war is back – what went wrong, what it means for share markets and Australia 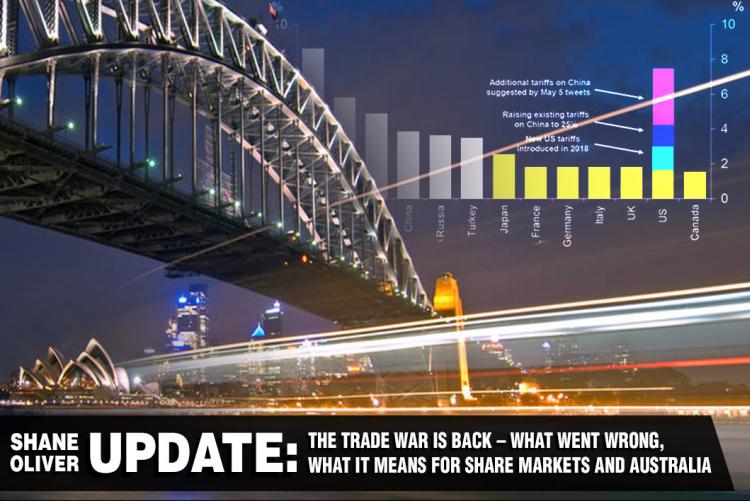 After taking a back seat over the last six months as negotiations appeared to make progress the US/China trade war is back on with the President Trump – “tariff man” - ramping up tariffs on Chinese imports again and threatening more and China moving to retaliate. This note takes a simple Q & A approach to the key issues.

What is a trade war?

A trade war is where countries raise barriers to trade with each other (such as tariffs or quotas on imports or subsidies to domestic industries) usually motivated by a desire to “protect” domestic jobs often overlaid with (or dressed up by) “national security” motivations. To be a “trade war” the barriers need to be significant in terms of their size and the proportion of imports covered. The best known global trade war was that of 1930 where average 20% tariff hikes on US imports led to retaliation by other countries and contributed to a plunge in world trade.

What is so good about free trade and wrong with protectionism?

A basic concept in economics is comparative advantage: that if Country A and B are both equally good at making Product X but Country B is best at making Product Y then they will be best off if A makes X and B makes Y. Put simply free trade leads to higher living standards and lower prices whereas restrictions on trade lead to lower living standards and higher prices.

It often strikes me as perverse that some want to protect local industry, but they don’t buy local themselves. The experience of heavily protecting Australian industry in the post WW2 period was that it was just leading to higher prices and lower quality products and Australians were voting with their wallets to buy better value foreign made goods anyway. We and many other countries started to realise this in the 1980s and so cut protection. We might have protected lots of manufacturing jobs if we stayed at the levels of protection of 45 years ago, but we would have become a museum piece as would the US.

Fortunately, despite the loss of jobs in manufacturing (from 25% of the workforce in 1960 to around 8% now) other jobs have come along in the services sector where Australia’s and America’s relatively highly-skilled but highly-paid workforce have a comparative advantage compared to workers in less developed countries.

In short, if you want to support your country’s products buy them, but trade barriers don’t work.

Why is President Trump raising tariffs then?

It’s basically about fulfilling a presidential campaign commitment to “protect” American workers from what he regards as unfair trading practices in countries that the US has a trade deficit with – notably China. And he knows this is popular with his supporters but there is also some degree of bi-partisan support for taking on China.

What does President Trump want?

While it’s been feared at times that Trump was willing to get into trade wars with any country that the US has a trade deficit with his main focus is China. Basically he wants China to lower its tariffs, allow better access for US companies, end US companies being forced to hand over their technologies and protect intellectual property of US companies. At a high level he wants a reduction in America’s trade deficit with China. Along the way he has renegotiated the NAFTA free trade agreement with Mexico and Canada and the free trade deal with South Korea and is in talks with Europe and Japan.

Where are we now?

Fears of a global trade war were kicked off in March last year with Trump’s announcement of a 10% tariff on aluminium imports and a 25% tariff on steel imports. US allies were subsequently exempted but China was not. On March 22 Trump announced 25% tariffs on $US50bn of US imports from China. These were implemented in July and August. After Chinese retaliation Trump announced a 10% tariff on another $US200bn of imports from China (implemented in September) which would increase to 25% on January 1 this year. The latter was delayed to March 1 in response to trade talks and then was delayed further as the talks made progress.

Last year’s tariff increases took the weighted average tariff across all imports to the US from around 1.8% to around 3% which took the US above the developed country average of around 2% but not dramatically so.

However, on May 10 the delayed tariff hike from 10% to 25% on $US200bn of imports from China was put in place and the US kicked off a process to tariff the remaining roughly $US300bn of imports from China at 25%. If fully implemented this would take the average US tariff rate on imports to around 7.5%, which is significant (albeit minor compared to the 20% tariff hikes of 1930.) See the next chart. 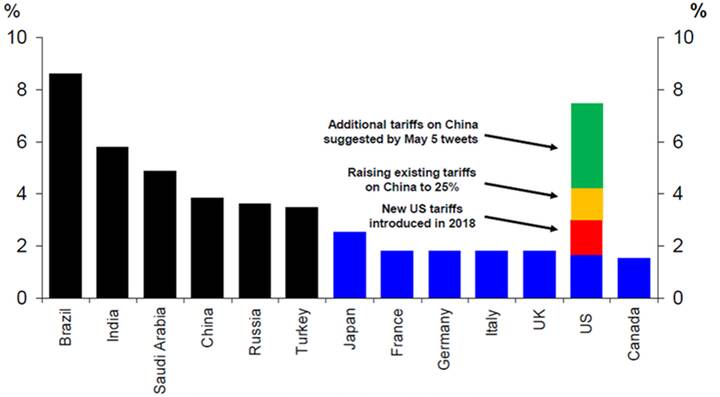 Along the way China has retaliated with a 10% tariff on $US60bn of imports from the US and in response to the latest move has announced this will be raised to as high as 25%. Its retaliation has been less than proportional partly reflecting lower imports from the US but it has also so far refrained from retaliating via other means such as selling US bonds (possibly because it could just depress the $US) and making life tougher for US companies.

At the same time the US is considering auto tariffs after a report lodged in February. A decision is due by May 18 but could be delayed given talks with the US and Japan.

What happened to the US/China trade talks?

Up until a week or so ago the trade talks were reportedly going well – with key elements reportedly agreed and only disagreement remaining about when tariffs would be removed and enforcement. But President Trump’s May 5 tweets announcing a resumption of tariff hikes with more to come was supposedly in response to China back tracking on what had been agreed. There has been much speculation about what happened: maybe negotiators agreed more than was politically acceptable to China’s leadership, maybe China saw it as two big a step down given Trump’s often perceived insulting approach, maybe they misjudged what he would agree to, maybe Trump’s resort to threats is just more “Art of the Deal” stuff to get what he wants and to prove that he is standing up for his base. Who knows for sure! But it’s likely that both sides may have become emboldened by better economic data and share markets this year, and so have decided to take risks again. Ongoing or rising tensions around Huawei, North Korea, Iran (with the US ending sanction waivers on China importing Iranian oil) and Taiwan are probably not helping the issue either.

What will be the economic impact?

Contrary to President Trump’s assertions China is not paying the tariffs being collected on imports from China. China will ultimately suffer if there is less demand for its exports but most of the cost is borne by US businesses or passed on to consumers. Taxing all US imports from China at 25% would be a big deal compared to last year’s tariffs and see the impact shift to largely consumer goods as opposed to industrial and intermediate goods in the first tariff rounds. Which in turn could add around 0.2% to core inflation and detract up to 0.75% from US GDP particularly as investment gets hit in response to uncertainty about supply chains. Given the flow on to slower global growth (which is where Australia could be impacted), hopefully the latest tariff hikes will be short-lived and the extra tariffs will be avoided.

What is the most likely outcome?

Our base case remains that the US and China will ultimately reach a deal to resolve the issue before too much damage is caused – once both sides refocus on the economic costs of slower growth, higher consumer prices and potentially rising unemployment. This is particularly relevant for President Trump given his desire to get re-elected next year as rising prices at Walmart and rising unemployment will drive a backlash. However, things could still get worse before they get better.

Why have share markets reacted relatively calmly? Can it last?

Since President Trump’s tweets announcing a resumption of the trade war, US and global shares have fallen about 4.5% and Australian shares have lost 1.7%. Chinese shares have been hit harder reflecting their greater vulnerability. But overall the falls have been benign compared to last year’s sharp falls (and they followed a sharp rebound so far this year). This likely reflects a combination of: investor optimism of a deal to resolve the issue; last years’ experience where the worst case fears of tariff hikes did not come to pass; hopes for more Chinese economic stimulus to offset the negative impact; and perceptions that the Fed is more supportive of growth now compared to last year when it was more worried about inflation. Australian shares have also been helped by their high exposure to defensive high yield stocks and ongoing strength in the iron ore price.

While our view remains that a deal will ultimately be reached and that this will see shares end the year higher than they are now, the risks have ramped up again after the setback in the talks and the associated loss of trust on both sides so investors need to allow that the trade war could again get worse before it gets better risking further short-term weakness in share markets. In fact, sharper share market falls may be needed to remind the US and China of the need for a deal.

What does it all mean for Australia?

Fortunately, Australian’s aren’t having to pay higher taxes on imports like Americans, but the main risk is that we are indirectly affected if the trade war is not quickly resolved and this drags down global growth weighing on demand for our exports leading to unemployment pushing higher than our 5.5% forecast for year end. The risk of this adds in turn to pressure on the RBA to cut interest rates, although we think they will do that anyway.

Key to watch for will be a continuation of trade talks. So far, the indications are mixed. The June 28 G20 meeting in Tokyo may be critical in terms of providing an opportunity for Trump and Xi to get negotiations back on track, with Trump saying that they will meet.

END_OF_DOCUMENT_TOKEN_TO_BE_REPLACED
Home The trade war is back – what went wrong, what it means for share markets and Australia