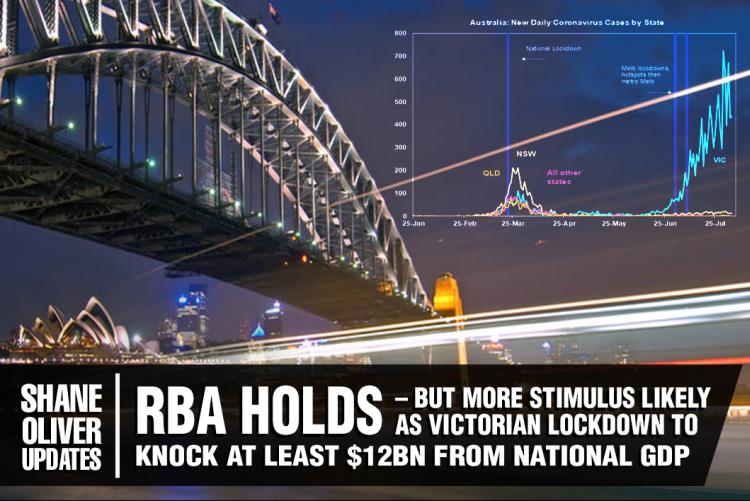 As widely expected, the RBA left interest rates on hold again for the fifth month in a row. It still sees its massive March monetary easing package as working as it expected and signalled more bond buying to keep 3-year bond yields at its 0.25% target but this is just a continuation of its Yield Curve Control program as opposed to new easing. It also noted that the coronavirus outbreak in Victoria is adding to the uncertain economic outlook and looks to have downgraded its 2021 growth outlook to +5% growth (from +6%) after an unchanged expectation for a 6% contraction through this year) and now sees the unemployment rate rising to 10% later this year. It reiterated that it remains committed to do “what it can to support jobs, incomes and businesses.” However, while it left monetary policy on hold, with Melbourne now in a stage 4 lockdown, pressure for further stimulus – particularly from the Government but also the RBA is building. 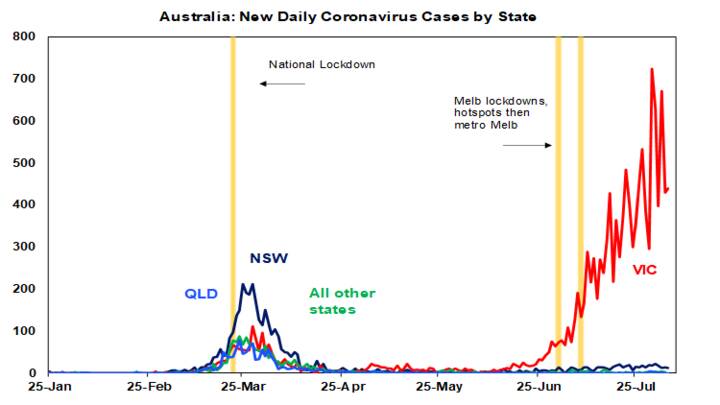 Based on New Zealand’s experience with a stage 4 lockdown and allowing for the fact that Victoria had never fully recovered from the initial lockdown, we estimate that this will cost the Victorian economy around $12bn to $14bn. This is up from an initial estimate of the cost of the stage 3 lockdown of Melbourne of $5bn.

Prior to the stage 3 lockdown of Melbourne we had been assuming that national GDP would rise 2.5% this quarter after something like a -7 to -8% hit in the June quarter. The rebound in indicators like retail sales following the reopening in May was directionally consistent with this.

However, a $12bn hit from Victoria would take this back to around flat and negative impacts on confidence could see the economy even decline slightly again in the September quarter. This is consistent with our Australian Economic Activity Tracker of weekly economic indicators like credit card data and job ads flatlining since June after a decent pick up from mid-April. 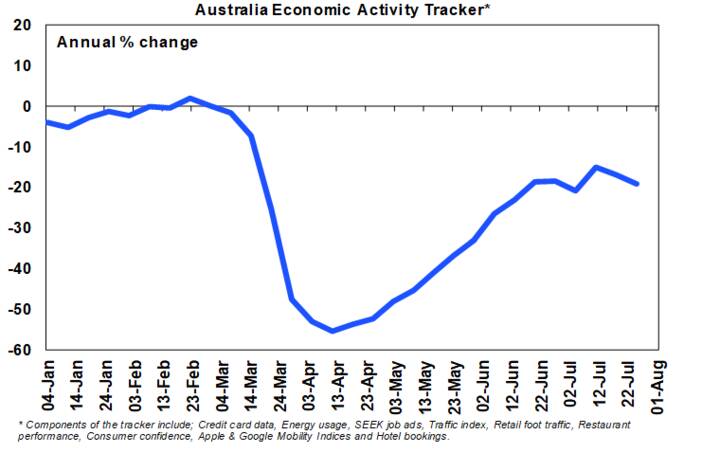 The net result though could be a further delay in the start of Australia’s overall economic recovery as measured by GDP into the December quarter - assuming that coronavirus is brought under control in Victoria again and that it can safely reopen.

At time of the Federal Government’s Economic and Fiscal Update we felt that the deficit projection of $184.5bn for this financial year was too optimistic and saw it closer to $220bn reflecting softer revenue and more stimulus than the Government was allowing for. The tightening lockdown in Victoria has added to this and we now see the deficit this financial year as ultimately being closer to $235bn. Our revised budget projections are shown below. Of course, these should be treated with greater than normal caution given the uncertain economic outlook.

We are assuming that the slower economy depresses tax revenue by a further $25bn this financial year compared to the Government’s projections (see the line labelled parameter changes) and that an extra $25bn in stimulus occurs. The Federal Government has already announced paid pandemic leave of $1500 for two weeks for Victorians without sick leave but it’s likely that both JobKeeper and JobSeeker will now end up costing more than projected two weeks ago, as hundreds of thousands of Victorian jobs could be impacted by the stage 4 lockdown. Additional stimulus is also likely to come in more industry support packages, a bring forward of the 2022 tax cuts and investment incentives.

While the deficit and debt blowout to the highest levels since WW2 will alarm some, we remain of the view that without it the economic outlook will be much worse and that its made viable by ultra-low interest rates, Australia’s low starting point deficit and debt levels compared to other advanced countries and Australia’s lack of reliance on foreign capital. 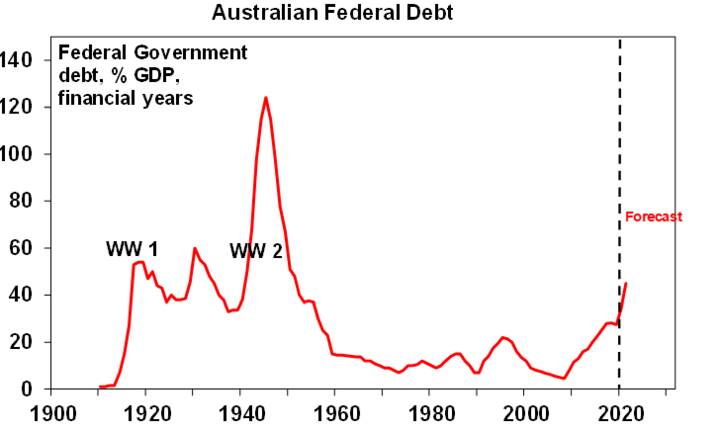 However, while the bulk of the pressure for further economic support stimulus will fall on fiscal policy, the RBA is also likely to end up doing more too. In terms what the RBA might do if it does ease further in the months ahead - it has all but ruled out negative interest rates, foreign exchange intervention and the direct monetary financing of government spending. But it sees still lower but positive interest rates and the purchase of more government bonds beyond what’s necessary to achieve the 3- year bond yield target of 0.25% as possible options. A rate cut to 0.1% would hardly be worth the effort (but they may still do it) which leaves more quantitative easing as the main tool for further easing. The latter could take the form of bond purchases beyond 3-year bonds and a possible target for the value of bond purchases. Meanwhile, rate hikes are at least three years away.

All of this begs the question: why are shares holding up so well? The answer is simple – while the second wave of coronavirus cases has increased the uncertainty around the economic outlook, its being offset by more positive signs of containment (fingers crossed) and hence recovery outside Victoria, ongoing positive signs regarding coronavirus treatments and an eventual vaccine globally, policy stimulus supporting the economy and ultra-easy monetary policy making shares look relatively cheap. So, we remain of the view that while shares are vulnerable to corrections, they are likely to rise on a 6 to 12-month horizon.